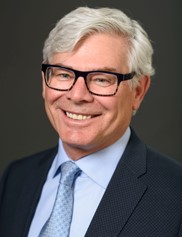 Barry James is the Chief Corporate Development Officer at Lloyd Sadd Insurance where he is responsible for developing strategic and corporate initiatives, managing client relationships and assisting with innovative business opportunities. Barry was previously Managing Partner of the Edmonton office of PricewaterhouseCoopers LLP, a position he held for ten years. With more than 35 years’ experience, Barry served as an integral business advisor to many Edmonton and area clients. Barry received a Bachelor of Commerce (with Distinction) degree from the University of Alberta in 1980, qualified as a CA in 1983 and became a Fellow of the Chartered Accountants in 2007. He was admitted to the PwC partnership in 1989 and was the Managing Partner of the Edmonton office from July 2001 to June 2011.

He has served as Chair of the Stollery Children’s Hospital Foundation, as a Trustee of the University Hospital Foundation and on the Board of Directors of the Edmonton Convention Centre Authority, the Forest Industry Suppliers’ Association of Alberts, the Edmonton Space and Science Foundation (TELUS World of Science), the Support Network Foundation and the Executive Committee of the Institute of Corporate Directors, Edmonton Chapter. He was previously a minister appointed member of the Board and Senate of the University of Alberta and served as Chair of the Audit Committee of the Province of Alberta.